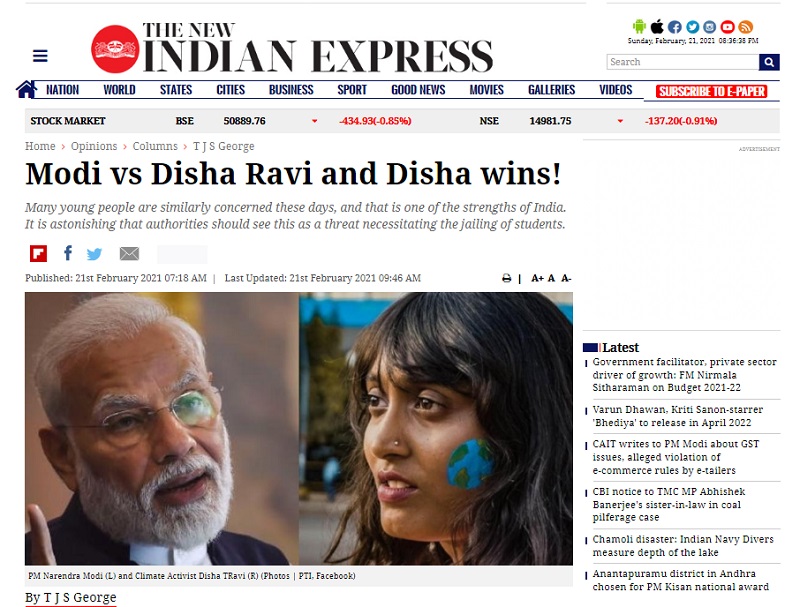 The newindianexpress on Disha ravi case online news publication shouts like inline with false spreading propagenda as well as anti-modi speaking agency, who don’t have anything to deal with national interest instead of encouraging instability in India. Is it newindianexpress free speach in India? When Disha Ravi was found supplying tool kit and planning for doing anti-national activity in shadow of farmer protest.

First of all farmer protest is not a deal of whole India, these farmer law which is benefited to all states of country but that may not be suitable for only two region why should government will revoke their great change to provide benefit for farmer. Government also agree to make change if anything wrong on the law but still the involvement of Khalisthani propegenda spreaders and anti-modi team diverting farmer protest to showoff at least something wrong in India.

Indian politician at least learn from Nepal opposition party in order to confirm national interest where all party sounds same.

Disha Ravi who was so claimed environment protester has caught by legal agency in India. If she didn’t made any mistake she will be free from custody. But the khalistani supporter, anti-modi and anti-national team working inline to burn India.

One recent survey from India Today ground survey many farmers are happy and also many farmers are in such a wish that private players will buy their goods from them and they will get good amount of money in return what we have seen in government where many issues and small farmers are not able to sell directly to government Mandi due to corrupt officials.